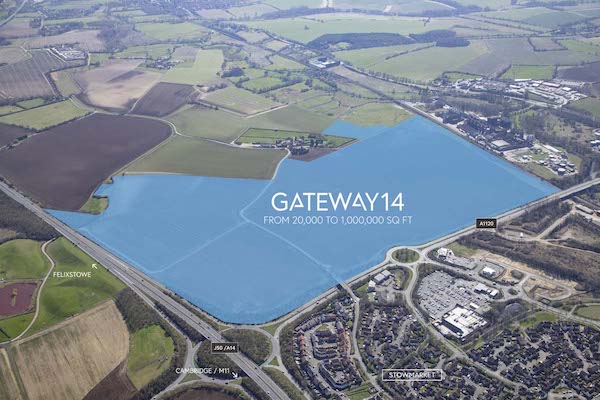 Works have commenced to create a 165-acre trade hub for logistics, manufacturing and R&D businesses at Freeport East’s Gateway 14 site near Stowmarket, Suffolk. Once complete, it will be the largest logistics and business park in East Anglia.

Freeport East is one of eight freeport sites in England announced by the Government in March 2021 which provide businesses with a range benefits including tax reliefs and simplified customs arrangements.

Located close to junction 50 of the A14, Gateway 14, which is owned by Mid Suffolk District Council, offers a prime location for manufacturing and logistics with its position along the A14 providing easy access to Ipswich, Cambridge and up to the Midlands as well as to the port at Felixstowe. Once complete, it will be the largest logistics and business park in East Anglia.

Cllr Suzie Morley, Mid Suffolk District Council leader, said: “This is a hugely important development for Mid Suffolk and the wider region. Gateway 14 has the potential to not only attract businesses to the area but also create a range of employment opportunities in the district. It is a key part of our vision in building a thriving and sustainable future for the residents and communities of Mid Suffolk.”

George Kieffer, Acting Chairman of Freeport East, said: “Freeport East is a transformational initiative providing a total of 275 hectares of development opportunities in an area around the ports of Felixstowe and Harwich. Freeport status will attract new and additional investment in world-leading infrastructure and innovation, driving the Green Industrial Revolution and providing extensive re-skilling and up-skilling opportunities to transform the life chances of thousands of people.”

The Gateway 14 project is due for completion in early 2023.